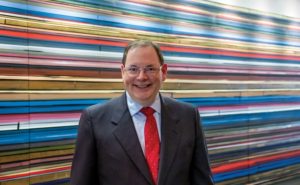 BLOOMFIELD HILLS—Michael B. Stewart has four college degrees, but that doesn’t mean he has stopped learning.

A founding partner with Fishman Stewart PLLC, Stewart sees every intellectual property client and every patent case as an opportunity to learn something new. And that’s exactly what keeps his practice exciting.

“I love to learn, and when you are helping people protect their creativity, you learn about their products and become able to explain them to others,” Stewart says. “You have to be able to explain things so people in their day-to-day life can understand them.”

On any given day, those topics might include detailed engineering plans for the automotive and aerospace industries, or maybe new advancements in medical or blockchain technology.

None of the cases Stewart takes on are simple, and few of them are easy to understand. That’s where Stewart’s intelligence takes over. He is able to draw on expertise in particularly challenging areas. He has a master’s degree in aerospace engineering and significant legal experience.

“What makes Michael stand out from the crowd is his intuition and creativity, combined with his unique ability to distill complex fact patterns into simple and understandable issues to achieve successful results for clients,” says law partner Michael Fishman.

Client Todd Duchene has sought out Stewart’s advice for a variety of companies, including Fisher Scientific, National Semiconductor, Solectron, Nuance and FLIR Systems, Inc. He currently is general counsel at Core Scientific, and he uses Stewart’s skills to develop intellectual property programs there.

“I have known Michael Stewart as a client and colleague for almost 25 years,” Duchene says. “He is very smart with a savvy business sense. He has good technical skills and is extremely diligent. He is a true fiduciary and is dependable.”

The son of an automotive executive and a teacher, Stewart grew up as a solid student with a love for learning.

That transferred into a double degree from the University of Michigan—one in English and the other in mechanical engineering. He worked for both the College of Engineering and General Motors while pursuing a master’s degree in aerospace engineering. He became interested in a law degree after working with expert witnesses in the company’s engineering analysis subgroup.

“They said I should go to law school because anyone who likes to argue as much as I do should be a lawyer,” he laughs. “I just liked to challenge expectations.”

And so, Stewart enrolled in the University of Michigan Law School while still working full time. Given his experience with product liability, that’s the avenue he initially pursued after graduation.

It wasn’t long, however, before Stewart found a way to marry both his engineering and legal careers into one successful practice.

Stewart had only been in practice for five years when he and Fishman left their firm to open their own intellectual property practice. It’s a business relationship that has proven to be a good blend of abilities over the years.

“We have different skill sets that work synergistically to result in optimal and efficient management of our law firm,” Fishman says. “Although Michael is strong-willed, he is always open to new ideas and is a visionary, which has been a very powerful influence on the growth and direction of the firm.”

Since the firm’s inception, Fishman Stewart has grown from five lawyers to 22. It has managed more than 100,000 patents and trademarks worldwide. More than half of the firm’s clients have been with them for 15 years or longer, establishing Fishman Stewart as a leader in the intellectual property realm.

“The history of the firm speaks for itself,” Stewart says. “We have a very good reputation and are great at what we do.” And Stewart is a key part of that reputation.

Fellow patent lawyer Todd Pleiness has worked with Stewart over the past 10 years, calling on his expertise, for instance, when competitors were designing around existing patents.

“Michael and his team were able to provide some insight into continuation options that allowed us to obtain two additional patents. We’re working on a third one now to provide direct infringement with new claims scope,” he says.

Pleiness appreciates that he can count on Stewart for straightforward, practical advice. He says Stewart is “very knowledgeable on various options to improve your ability to enforce a patent or continuation.”

Hedy Nadjarian is general counsel for GroupeStahl, a material handling equipment supplier that uses Stewart for its intellectual property needs. In recent years, the company has won a number of lawsuits because of his expertise.

“He has been a great asset to our company, focusing on our efforts to protect our IP while bringing practical and business thinking to the issues,” she says. “His focus, experience and technical knowledge have really helped us focus on our IP protection—a critical area to our company.”

VARIETY IS SPICE OF IP LIFE

On any given day, Stewart is responsible for knowing the details about how a wide variety of products work.

“That’s part of what I love,” he says. “I get the opportunity to get a more detailed understanding of people’s creativity.”

An emerging area of practice is blockchain technology, the computer programming that allows for financial transactions such as bitcoin exchange. Within the tech industry, blockchain is considered more secure for financial dealings because it’s managed via many computers, not just a single central database.

Still, Stewart dove in quickly to learn the details behind this new technology, anticipating it will be an area of firm growth for years to come.

“I’ve been on a steep learning curve, but it’s been fascinating to develop that expertise,” he says. “I see it going into even more of our daily lives.”

“The stakes are so high now that most cases are settled before reaching a jury trial,” he says.

“Michael is very strategic and innovative,” he says. “He is prepared to tailor his approach to the specific circumstances to maximize effectiveness. He is proactive and always preparing for a variety of scenarios, enabling him to ensure success even under tight timelines.”

Fishman Stewart has achieved an entirely paperless office, something that’s particularly challenging in intellectual property law. Doing so has contributed to the firm’s ability to add expert lawyers to its team.

“It doesn’t matter where you are in the world, you have access to all the firm’s resources,” Stewart says. “Where our attorneys are located is becoming less and less important.”

LOVES WHAT HE DOES EVERYWHERE

Likewise, Stewart’s dedication to intellectual property issues isn’t limited to the walls of his firm.

He has lectured to engineering, business and law students in university settings including at the University of Michigan and the University of Notre Dame. He teaches fellow lawyers through various third-party organizations. He also participates in public education sessions, including those sponsored by the United States Patent and Trademark Office. He keeps his engineering mind sharp as well, serving on the editorial board for the Engineering Society of Detroit and writing for its magazine.

In his downtime, Stewart enjoys spending time with his adult daughters. Caitlin is studying in Austria and Elizabeth works in Chicago. At age 56 and in a long-term relationship, Stewart likes bicycling, boating, hiking and camping. He now spends a lot of his free time restoring an 1880 Victorian-era home in downtown Detroit.

One benefit of Stewart’s international practice is that it lends itself to the type of travel opportunities he likes to soak in. It’s not unusual for Stewart to fly in a day early so he can catch a matinee or visit a local museum before heading to work on Monday. His favorite place to visit thus far has been Peru.

“The history was amazing,” he says. “The fact that they have 80 percent of the world’s environmental zones in one country was amazing.”

Of course, work-based travel is just a perk of Stewart’s job. The reason he continues to work every day is his core desire to keep learning. The designs he sees and the products he researches never cease to amaze him.

“I love what I do,” Stewart says. “People always think intellectual property is dry, but it’s just the opposite. You get to touch people’s creativity.”

This article originally appeared in Leading Lawyers Magazine—Michigan Edition for 2020 and has been reprinted with permission.

Click here to read the FULL article about Michael Stewart and view the ADDITIONAL PHOTOS included in the story on the Leading Lawyers website. Download the full article in PDF format here.