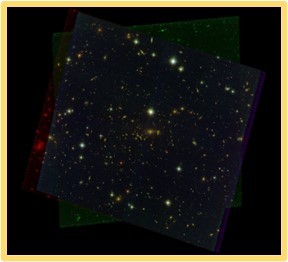 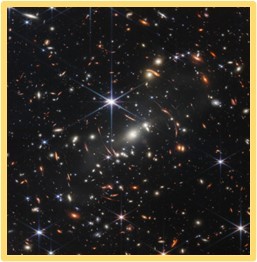 For scale, the slice of heaven depicted in each of these images is about the size of a grain of sand held at arm’s length.

Almost as amazing as the images, was the quantity of products bearing these images that flooded online marketplaces. Within hours of the first images being released, they were put onto fanny packs, sweatshirts, posters, travel mugs, and the like. Enterprising merchants swiftly capitalized on the news coverage and the public interest that the images generated. For each celestial body that can be seen in the James Webb image above, there are least a dozen online retailers selling products bearing the same image.

This merchandizing free-for-all is made possible by the fact that the images from the James Webb telescope reside in the public domain. Subject to a few exceptions, under U.S. copyright law, works created by the federal government and its agencies are copyright-free. This means that anyone is free to copy, publish, distribute, adapt, and otherwise use the works.

Some of the products also depicted one or more of NASA’s logos. Unlike the public domain images, which are free for anyone to use, permission is required to use NASA’s name or logos on products and advertisements for goods and services.

In fact, NASA’s logos are protected by two federal statutes. One statute prohibits the use of NASA’s name, initials, or logos from use that would suggest NASA’s affiliation or endorsement of a product or service. The other statute criminalizes any use of the agency’s “insignia,” except as permitted by government regulations. NASA’s regulations permit use of its name and logos on a case-by-case basis and the agency publishes its merchandising guidelines on its website. To foster public support, NASA regularly partners with various private companies to produce NASA-branded merchandise such as bags, t-shirts, and hats.

So, if you are looking to start up your own line of swag featuring the James Webb images, have at it. But, read the fine print if you plan to use NASA’s name or logos, so you don’t commit a federal crime.

*The James Webb telescope was named in honor of former NASA administrator James Edwin Webb (no relation to this author) who oversaw the Apollo program.

Kristyn C. Webb is an associate attorney at Fishman Stewart and works in the firm’s trademark, copyright, and litigation practice groups. She is currently seeking a post graduate law degree in UK, EU, and US Copyright Law at King’s College London. Check out her full bio here.

Humans have been making and using musical instruments since at least the Paleolithic age—long before patent systems were put into place to protect inventions.