By Michael B. Stewart

English often uses the word “gummy” in place of “gummi,” but the latter spelling is the preferred version according to a detailed explanation from the Bulk Candy Store. Apparently “gummi” refers to a sugary, gelatinous material used to make candies, while “gummy” means showing the gums.

Despite its long-term popularity elsewhere, Haribo gummi bears only arrived in the United States in 1982. Yet, they have met with amazing success. In fact, Haribo’s first US-based manufacturing facility is set to open in Pleasant Prairie, Wisconsin in 2023, a source of pride on the city’s web site.

The gummi bear was invented in 1922 by German confectioner Hans Riegel Sr., in his kitchen using little more than a copper pot, a rolling pin, and a stove. Riegel’s first gummi bear prototype was the Tanzbären (dancing bear). According to a recent article in Smithsonian Magazine, “Riegel wanted to give his candy a face and a personality.” 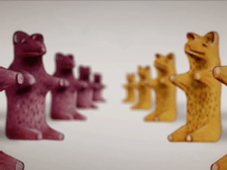 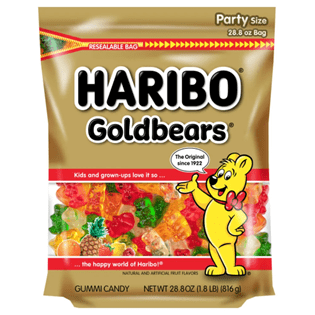 While Haribo has trademark registrations all over the world including design marks such as the bear pictured on the packaging above (US Trademark Registration No. 4075737), Haribo apparently has struggled to retroactively protect the underlying bear shape associated with its gummi candy, having failed to do so when they were first introduced in 1922. 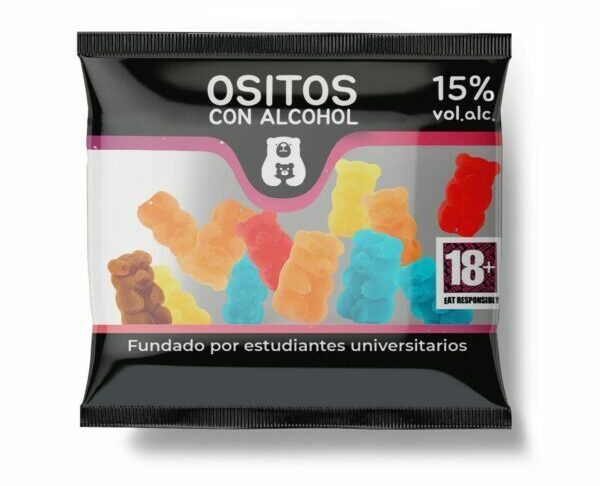 According to Osito, six gummi bears equal a glass of beer, and 15 gummi bears are equivalent to a martini. Osito says that a group of university students thought it’d be cool to mix their childhood’s gummies with the alcohol they now drink at parties.

Unsurprisingly, Haribo was displeased when Osito first offered its alcoholic gummi bears, sending a six-page cease-and-desist letter and threatening legal action against Osito. Among other things, Haribo contrasted the wholesome nature of its gummi bears with a product that promotes alcohol consumption.

Unfortunately for Haribo, its attempted enforcement effort spectacularly backfired. Rather than capitulating, Osito leveraged the letter to generate brand awareness that it never could have obtained on its own. “When eating gummy bears with alcohol, you’re pissing off the giant Haribo. The German company demanded that we cease selling our alcoholic gummy bears and that we give them the “ownership” of this Internet domain (wot?). As you can see, we didn’t comply.” To Osito’s advantage, the dispute has been promoted all over the world in a wide range of publications including the Guardian, Bild, Cotizalia and Food & Wine. Even Getty Images offers a product comparison photo that it licenses on its website.

To date, Haribo has been unsuccessful in its enforcement efforts regarding its bear design. According to Osito, to this day, 2,213,129 alcohol gummi bears “have gone partying.”

As discussed in one of our white papers that can be found at www.tackleboxinsights.com, to maximize enterprise value it is essential to leverage all forms of intellectual property protection to protect creativity. Things may have turned out differently if Haribo could have shown its exclusive right to use bear shapes for gummi-based candy. Having failed to do so, however, its underlying fame and longevity became a detriment when it sought to overreach beyond its rights. They’ll just have to bear the cost of their earlier choice!

This World IP Day, we celebrate young inventors and creators who are shaping our future; Oakpoint honored by DBusiness Magazine.

Andy Warhol paintings are on trial, and the case is as colorful as his pop art. Enjoy our curated look at the landmark case with attorney Chelsea Russell.

Disney's IP empire is vast and well guarded, but when it launched The Mandalorian show it intentionally kept one character secret and without traditional protection. Find out who and why in this week's Fish Tank newsletter.

Scammers are lurking behind every corner these days, and USPTO customers are not immune to these criminals. Attorney Barbara Mandell is here is help you identify and stop fraudsters targeting your valuable intellectual property.