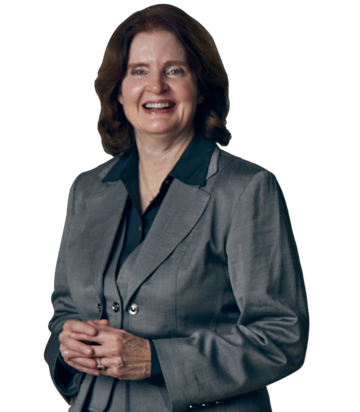 Of Counsel
Contact Penny
+1 (248) 593-3309
Penny Prater is an intellectual property lawyer with strengths in the areas of patent portfolio management, licensing, and dispute resolution. She has been legal representative on nearly 100 patents that were personally prosecuted in-house and collaborated with outside counsel on numerous others.

Penny is experienced in intellectual property matters, particularly in the energy and chemical and sectors, having worked for several major oil companies as an engineer, as well as a lawyer. She began her legal career as a patent examiner at the United States Patent and Trademark Office, in the area of drug delivery devices and bio-affecting drugs, and is also familiar with biotechnology and pharmaceutical issues.

Penny has negotiated dispute resolutions through use of cross-licenses and covenants not to sue and has effectively employed use of noninfringement and invalidity opinions to ensure freedom of operation. She understands the value of innovation and has developed patent portfolios that can be effectively monetized.

Between 1993 and 2000, Penny served as intellectual property counsel at Mobil Oil in Fairfax, Virginia. ln that capacity, she prepared and negotiated cross-licenses with other major oil companies in the area of lubricant dewaxing technology. ln addition, she prepared internal non-infringement opinions and invalidity studies, and patent applications in hydroprocessing technology and related areas. Penny was also a patent attorney for Exxon Corp. in Baton Rouge, Louisiana from 1990 to l993, where she was engaged in patent prosecution in the areas of pillared clay and zeolite catalysts.